Why GR No Longer Advertises With Targetspot

Hey there! In case you haven’t noticed, ads have stopped running on our station since January 1st, 2021. Read on to learn why.

It Begins
In April 2020, we began running in-stream ads on the radio station. These worked in such a way that certain ads would only play in certain countries, with some countries never being served ads at all as they were outside our ad company’s service area. I may be stating the obvious here, but the goal was to make some additional money back from lost store sales due to the pandemic in order to continue funding the systems that keep the station running (server rental, domain names, music, etc.).

From the start, we were aware that the ad company we went with, Targetspot (which has integration with Shoutcast, our broadcast software), had a bit of an odd lag time between when ads ran, and when payout would become available: 3-4 months. They do all of their payouts via PayPal, so in theory, setting this up should be an easy, fairly automatic process. Unfortunately, working with this company has been anything but easy. 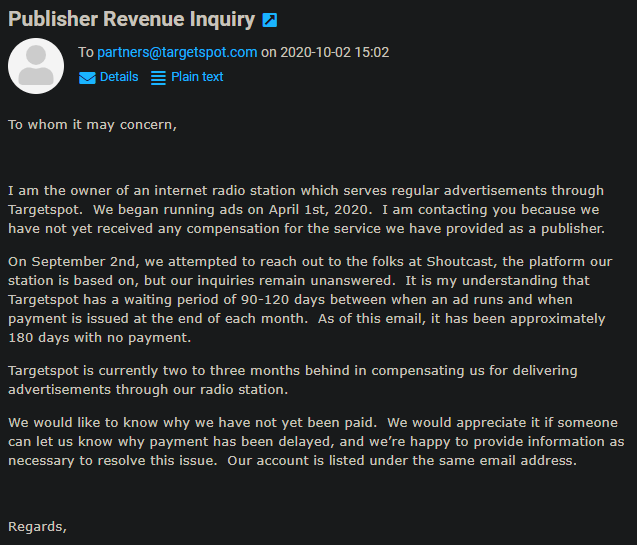 On October 2nd (6 months after we began running ads), we had not yet been paid, so I reached out via email to make sure things were set up alright and that they had everything they needed to fulfill their obligation of paying us in a timely and consistent manner. Within a week, we received a couple payments for, presumably, the first couple months outside of what would have been a 4-month lag period. Things seemed to have finally been set up, and we reasonably expected it to be smooth sailing from then on. 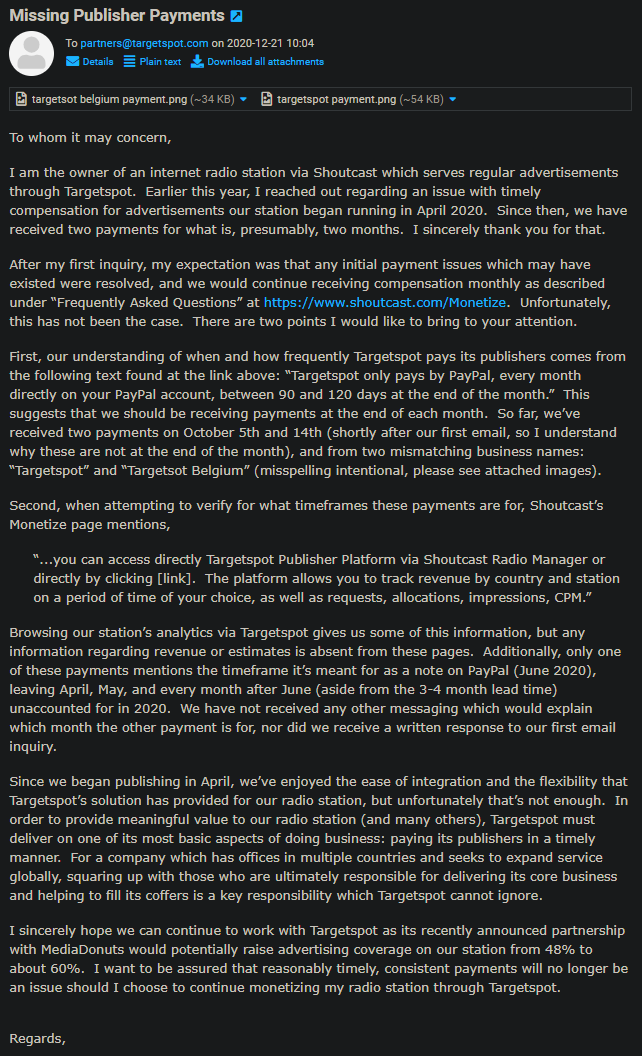 Two more months go by, and two more expected payments were missing. I reached out to them again, this time with a more lengthy and detailed email which addressed the same issue we had in October, but also attempted to gather more information. When they failed to respond to us again, and failed to pay us anything before the end of the year, we pulled all ads from our station. One of the conditions for payout was that a certain threshold must be met within a given year, and I wasn’t about to run three more months worth of ads for the chance of actually being paid for it.

Is This Even a Real Company?
Throughout 2020, Targetspot had made a couple announcements about their service offering which we were very interested in. They had increased global coverage so that listener coverage on our radio station would have gone from about 48% (covering primarily countries in the Americas and Europe) up to about 60% (covering additional countries in those regions, plus new countries in Southeast Asia). It’s clear that Targetspot is an active company making efforts to expand their outreach and improve their value proposition to publishers like us. Unfortunately, they failed to meet our most basic expectations in that they were unable to provide a reliable, consistent source of income that would help keep our station running among other things.

To be clear, this is a company that has offices (physical offices!) in multiple countries, and a corporate hierarchy which suggests they take their business seriously. From what I’ve seen, I seriously wonder if this is actually just one or two people operating at the redline such that they don’t have the funds to pay their publishers in a timely manner, the organizational aptitude to know what account they’re using to pay their publishers, or the time to make sure they spell the name of their own company correctly.

Now (as of the time of writing), with 7 months of unpaid ad revenue, we’ll be continuing to pester a company that claims it offers professional, industry leading service about our meager dues.

The Conclusion
That’s it then. We’ve removed ads, giving our listeners more of what you’re actually tuning in for. It doesn’t mean they’ll be gone forever; we might look at other integration options in the future, and we’re open to suggestions and comments our listeners might have on that front.

For now, we’re genuinely thankful to all the folks that continue to support our station by buying a T-shirt, buttons, stickers, or by giving a monthly contribution to Three by Seven’s campaign. Thanks, everyone!

Is there anyway to support you guys right now. Like a patreon?

If you’re interested in supporting the people behind the station, we do indeed have a Patreon campaign under the name Three by Seven.

Three by Seven is the publisher name for our group in places like the Google Play store. Most updates and posts are related to our work on GR, but this also leaves a path open for working on other projects which we’ve occasionally talked about on Live shows and such. You’ll find more info that helps to explain what the campaign is meant for on Patreon.