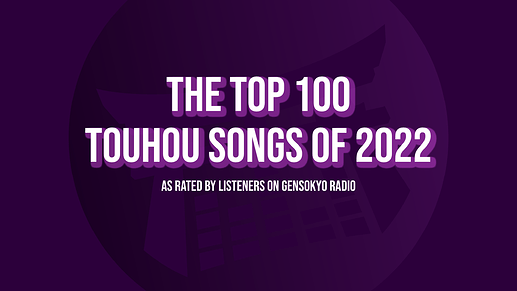 This week marks our 100th knowledge post, and what fortuitous timing to also bring the Top 100 song list of 2022 this week along with our 20th Meetup event. For more details, read on.

Every year since 2016, we’ve put together a Top 100 song list based on ratings received by active listeners on Gensokyo Radio. After year’s end, the list is automatically compiled, calculations are run, and every song is given a score based on several rating activity factors as well as airtime. Afterwards, we put together a video to showcase each song in the Top 100 using song previews where each preview is 20 seconds or less. This video premiered via YouTube on Sunday ahead of our most recent Meetup event. If you missed it, it’s now a standard YouTube video which you can find a link to at the bottom of this post.

Meetup #20 began immediately after the conclusion of the premiere event on Sunday. The Meetup was titled “100 Ways to do the Top 100 Song Chart.” We detailed our methods for compiling this list every year, and we also explored a multitude of additional factors that could be considered which may (or may not) result in higher probabilistic accuracy. If you missed that event, it’ll be available as a podcast approximately a week later.

Finally, we’ll be inviting a new guest for Live #124 tentatively scheduled for this Saturday, January 21st. Stay tuned for the official announcement which will go up via our social channels as well as through our #announcements channel on Discord.

To celebrate the release of the Top 100 list, you can use the code “TOP2022” to get 10% off most items in our store. This will remain valid until this Sunday, and we’ll mention it again during Live #124. That’s all for this week, thanks to everyone who rated songs in 2022, and thanks for listening!