"Strings on the Vexation" by pearls before swine, Amongst Other Things 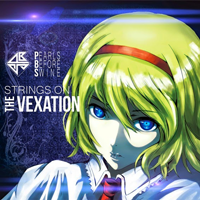 Been a while since you all saw a review here on this site since GR6 released, and I want to change that. It has been eating at me for a while, but better late then never.

So let’s get a general overview of the Touhou music scene at the moment between this post and the last review. Shibayan released “Adrastea”, ENS dropped “Proof Presence” along with their instrumental companion to “Perpetual Devotion,” and as cYsmix stated back during Live 30, he is working on some new stuff. In the metal scene, you have the usual suspects putting stuff out, Undead Corporation, UI-70, IRON ATTACK!, and Kissing the Mirror (who seemed to link up with LA Kia for some pretty cool Symphonic stuff), but one band jumped out at me, Pearls Before Swine.

These guys have been my radar for a while, making some pretty cool metalcore stuff. However, their new album “STRINGS ON THE VEXATION” has gone Djent. Now if you have no idea what Djent is, here is the Wikipedia definition since it is just easier to understand than my definition. Since it is hotly debated whether Djent is a genre, I believe that the past few years have solidified Djent as a subgenre of Progressive Metal with bands like Periphery, Born of Osiris, and Animals as Leaders proving it is more than a play style. I am really liking this move over to Djent a lot of bands are doing now, and I would love to see it more within Touhou Metal. I feel like it adds variety to the mainly Metalcore and Symphonic dominated scene.

The album itself is full of Djenty goodness. What strikes me as awesome is how much it does remind me of Periphery’s newer stuff. I am really loving GASENs vocals on the track “Vexation,” they give me chills. I feel like for as small of an album this is, five tracks, I feel like it packs a big enough punch to push past all the other albums released during Comiket 87 and make its way to my ears. I highly recommend this album to any Touhou metalhead. It’s an album I love and I always show it off to all my non-Touhou metalhead friends.