Yet again, we broke more records in July on the station and the website. Part of the numbers you’ll see below can be attributed to the promotion we did at the end of June at AX2012 in California. Even though there was a small number of materials that made it into peoples’ hands, the effects have the potential to compound as people tell their friends about Gensokyo Radio. Of course, there’s more at work than just that though, so let’s get to the numbers. 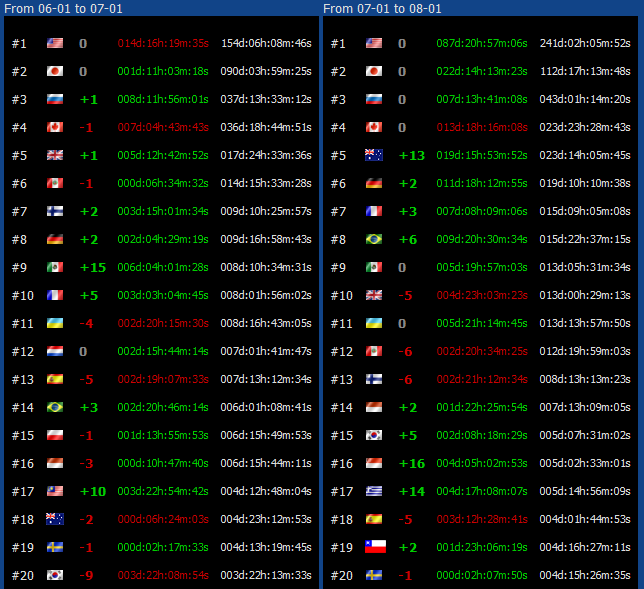 We’ve also added a new statistics section to the sidebar which shows Listen Time by Country. This is a more accurate depiction of what countries listen to Gensokyo Radio the most. We’re able to track down to the second what countries have tuned in, when, and for how long. This gives us a lot of interesting data, and we’d like to share some of it with you. Here are some numbers comparing listen time changes between June and July.

This new data makes it possible to see where your country stands in the rankings. We’re interested to hear what our listeners think of this new data!

What’s Been Going On

Finally, an update on what’s been going on behind the scenes at Gensokyo Radio. Some people may be wondering where some of the new features are, or what has changed since GSR4 went live. So, for those wondering, I’ve put together a list of things I’ve done to improve the site since re-launch.

One last note about Gensokyo Radio’s new user system. We’ve seen site visitors try to register on the page, but the system remains inactive because there simply aren’t any features to use an account for at this time. It’s definitely cool that people are eager to set up an account and do more on the site, but things like commenting and rating, the listener history system, profiles, notifications, etc. simply aren’t set up yet. When there’s something to use accounts for, that’s when I’ll open it up for people. Until then, you’ll just have to wait and see, I suppose.

Noldesu | Posted on August 1st, 2012, 05:48:39 PM
This is awesome and still continues to be awesome, I love that. Just a little question, Do you expect a crapload of people trying to register when the sign up section gets enabled? Just asked for curiosity.

LunarSpotlight | Posted on August 1st, 2012, 07:45:08 PM
I think there will be plenty of people that will sign up when they can, but I would be seriously surprised if it backs up the site or something similar. I don’t think there will be /that/ many people :3