[Oversight] Two Songs in One

While listening to GR today, this song started playing and I’ve been meaning to report this but it kept slipping my mind until now. There’s an error with this particular version of the song. Normally the song is roughly 12 minutes long (Source: There’s another Skyrise Illuminance on GR that’s an earlier release of the same song). This one has another song tacked onto the end of it that’s definitely meant to be a separate track. The image below shows about where Skyrise Illuminance ends and then there’s a gap of about 2 minutes of silence before the second song starts. I’m not sure how easy this would be to fix but I figured it would be good to report it so that the GR team is aware. 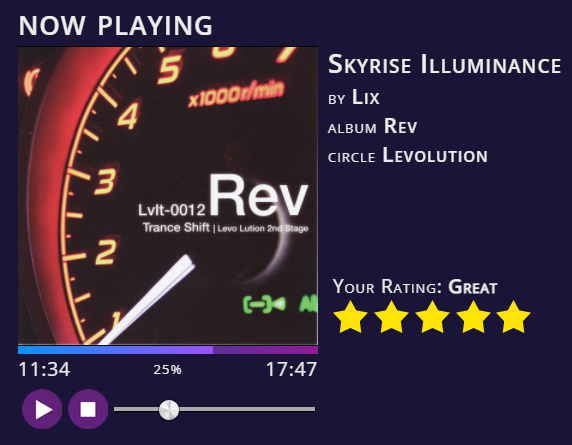 That said, still massively enjoy the station and I hope to see it continue for years to come.

Hey there! Thanks for the kind words.

Yes, we’re aware that this track is problematic, and it will be addressed when we integrate “musicbox” after the release of GR8. I know that’s just words to you, but basically, we’re doing a bunch of library cleanup while making it easier to ingest music in the future. Part of that cleanup process will identify tracks like these.

From what I’ve heard, the real reason why those tracks are intermingled is that the second song is ia secret track that was kept in the same track as the first song. Mostly as a gimmick

That’s an interesting gimmick. I never would’ve thought to do that.