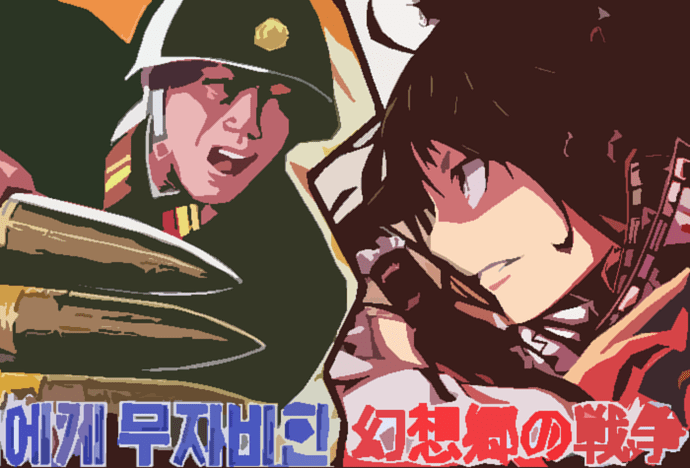 Earlier this morning, North Korea issued a statement which made a sudden and unprecedented declaration of war against the mystical land of Gensokyo. According to multiple sources, North Korean military officials were seen entering an emergency meeting at midnight, and had come to the conclusion that long-standing tension between countries like South Korea and the U.S. had become irrelevant in recent times.

One news agency reported that, in the midst of the confusion, it had become apparent that the land of Gensokyo had something to do with how relations between the countries has been perceived until now.

In the statement released this morning, Kim Jong Un had this to say:

“The moves of the U.S. imperialists to violate the sovereignty of the DPRK and encroach upon its supreme interests have entered an extremely grave phase. Resulting from the meeting which take place yesterday night, it is understood that the Gensokyo shroud takes fault and will be punished as a result. Under this situation, the dear respected Marshal Kim Jong Un, brilliant commander of Mt. Paektu, convened an urgent operation meeting on the performance of duty of the Strategic Rocket Force of the Korean People’s Army for firepower strike and finally examined and ratified a plan for firepower strike.”

The DPRK leader also cited that the B-52 bombers previously thought to have flown over South Korea as a scheduled military exercise were in fact an experimental new weapon recently developed in Gensokyo, the Flying 13-5LOLI. More of these experimental weapons are believed to be in production.

Hakurei Reimu, a noted figure in the land of Gensokyo, denies these allegations, but also mentioned that she along with the rest of Gensokyo would be happy to oblige because it would “make things more interesting”.

Gensokyo has never been involved in a war with any countries from the outside world before now.

Another reporter has noted that there are signs which suggest that war will not likely break out due to North Korea’s history of rhetoric and saber rattling, and also because Gensokyo is nearly impossible to find.

vampirecommie | Posted on April 1st, 2013, 11:22:41 AM
I actually goggled this. I wonder does this mean I’m gullible, or does this say something about North Korea?

flyingfetus | Posted on April 1st, 2013, 08:21:43 PM
If North Korea manages to attack Gensokyo there is nothing in this world that could save North Korea from the hell (bullet hell) that they would be unleashing upon themselves.

thedratinifarmer | Posted on April 2nd, 2013, 07:47:40 PM
May we have a moment of silence for North Korea before they are mercilessly wiped off the face of the planet.