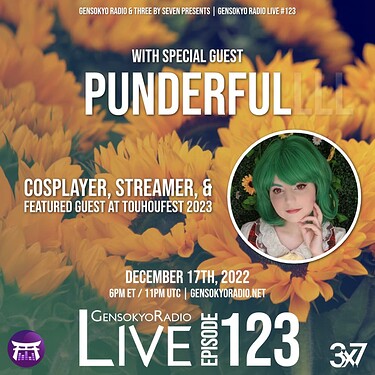 This week, we met up with members of our community during Meetup #19, had some unexpected station-side downtime, and will be inviting a new guest next weekend for Live #123. For more details, read on!

During Meetup #19 titled “Help Wanted,” we reflected on the progress we’ve made since last year’s similarly titled “Critics Wanted” Meetup. We were able to look at a publicly available, concrete list of work items and discuss how each has changed over the past year.

Much of our focus and discussion was around our work with the web and mobile applications, website updates, content plans, and store changes among a handful of other topics. We also gave some time to talk with our community about the items we have yet to complete from last year, as well as new items for the year ahead. We touched on the topic of funding future projects and how Indigo and our new storefront aim to help bring down merch costs, enable us to transport radio equipment to events like TouhouFest next year and beyond, and to make ideas become reality in a more timely manner. If you missed it, you can tune in to the full event when we publish the episode about a week from this post.

A couple nights ago, some of our listeners may have experienced some unexpected downtime as the result of an internal server error occurring at two of our three regional nodes. The good news here is that our station was still available to listeners who bothered to manually navigate to the remaining endpoint. The bad news is that our system is designed to automatically direct people to a functioning node, and that unfortunately did not happen gracefully. This resulted in listeners in certain regions receiving a 404 error when attempting to connect.

Our investigation yielded that a program present on both region servers had suffered from a segfault causing a key piece of software to crash. The cause was that a backup source had become disconnected from both regions, and operation continued to appear normal publicly up to the moment of the segfault. We’re continuing to look into why only two of the three servers were affected and will likely push an update to all regions in the near future to prevent this from occurring again.

Finally, for some lighter news, we’re excited to announce that we’ll be inviting Punderfullll on for Live #123! Punderfullll is a cosplayer and streamer who has masqueraded as various characters from the series since 2013, and will also be a featured guest at TouhouFest in 2023. Tune in on Saturday, December 17th at 6pm ET (3pm PT) on Gensokyo Radio via our website, Icecast, TuneIn, or anywhere else we’re listed. We hope to see you then on Discord!

That’s all for this week, make sure to stop by this Saturday for the Live show, and thanks for listening!