As you may have seen announced at our Steam group page or on Twitter, our next live show, dubbed “Live Number Five”, will be our 5th Gensokyo Radio Live show. It’s happening on January 18th, 2013 @ 7:00p EST / 4:00p PST and will include a mix of music which received high listener ratings as well as new music that we’ll be bringing to the library with our next major update, “GSR5”.

In stats, December saw a slight decline in broadcast time, falling 147 days short of November’s record-setting 1,100 days of music streamed. As we said on November’s stats report, we were actually expecting this to a certain degree. In reality, it’s a combination of a fan from Finland listening on a different network (this is what happened before) as well as the holidays taking up more of everyone’s time. 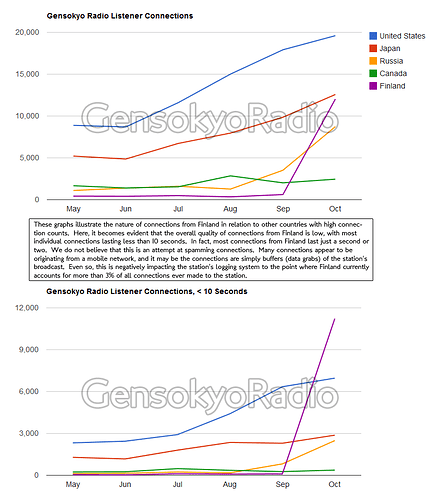 The US saw a large 134 day drop in listener time, but is somehow still in 1st place in the country rankings with a 97 day lead over Japan. Japan was the only country in the top 5 to see an increase in listener time. France jumped 9 places into 6th place, as well as more than doubling their listen time (11 days in November, 24 days in December). Italy also jumped 9 places into 21st place, and doubled their listen time from November. Australia and the UK are holding steady at 8th and 12th place respectively. Sweden saw the largest drop in listen time, dropping 20 places into 25th place, and going from 39 days to 5 days of listen time.

19.6 years streamed in our first year… man, I never would have guessed that a year ago, I would help make something that so many people spend their time on from all over the world. It’s really cool to be a part of bringing you guys what Gensokyo Radio is today. Of course, with the development of GSR5, it’ll only get better. We’ll be talking about that and more this Friday at Gensokyo Radio Live #5. Our Steam chat room will once again be where we’re at.

Kheldragar | Posted on January 14th, 2013, 07:43:04 AM
I don’t even listen to anything NOT Touhou song remixes anymore. Well, only rarely. This site collects all of them so I don’t even need to search for a new one after I’m done listening to one. (Although there are quite a few terrible tracks on here, they’re few and far inbetween.)

LunarSpotlight | Posted on January 14th, 2013, 10:07:16 AM
Agreed. We need to do a sweep one of these days for those songs that aren’t so good. Ratings help a ton for that, by the way. It’s sort of funny how, whenever I look at what songs have been rated, there’s a huge list of 5’s and 4’s, and then the short list of 2’s and 1’s is sitting quietly at the bottom. Hope to see you during the show if you can make it!

Zetsubou | Posted on January 19th, 2013, 02:18:11 AM
I moved over to my companies’ main corporate network and Gensokyo Radio is blocked T_T So that is probably a decent chunk of the US listening time drop. I would forget to shut of the stream on my Linux box most nights.