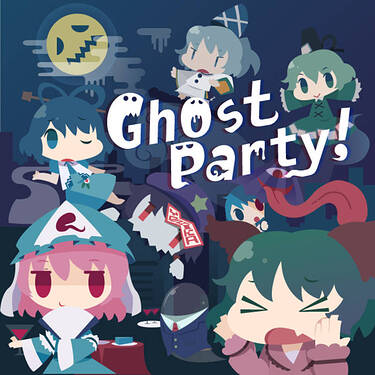 cYsmix’s latest album, “GHOST PARTY!” gives me the largest amount of goosebumps I have ever felt. This album can prove that the little guys can play with the big dogs and bite hard! To describe this album to you, I would have to say it is like if Shibayan wanted to make an album with Alstroemeria records. It is possibly one of the best albums by far to release this year, if not ever. This is cYsmix’s best work by far, and that is coming off his last release “-Electro Festival-” which hosted a ton of guest tracks.

There is a lot of heavy influence from Touhou 13: Ten Desires. Some of the remixed themes include “Night Sakura of Dead Spirits”, “Ghost Lead”, and “Rigid Paradise”. All with very unique takes on each ranging from Dark Electro Dub, to some really Disco-esque House, to almost a softer Jazz like tone. The First three tracks are LITERALLY the best songs i have ever heard, with “Night Out” at my number one. It is a really funky take on “Night Sakura of Dead Spirits”, and really makes my head bounce. It really reminds me of some of the stuff Shibayan has done in the past, BUT BETTER! The next one on my list is “Abandoned Shrine Party” makes me think of Alstroemeria Records and how there arranges flow. There are a lot of wubs, but is FAR from being a dubstep wreck. It is also the darkest sounding song on the album, but still was very light, which in my opinion is brilliant! The drop really get me going as well. The first track is called “占い師” which can be translated to “Fortuneteller”. It is the best song to start the album with since it has a very nice build up to a nice house tune.

This is probably the best remix of “Ghost Lead” I have ever heard. Now, if you are saying, “But how you know I will like this Album?” the answer is, I don’t know. But here is my opinion. I have been listening to this album of 6 tracks FOR 48 FULL HOURS, and not once thought it was boring or old, or one listen and I am done. This album is available for free at this link: http://cysmix.bandcamp.com/album/ghost-party This album was so good, I thought I would support cYsmix, who by the way is only 18 from Norway. This music can compete with anything that comes out at Comiket, and beat a vast majority of it. Heck, I predict that in a few years we can see cYsmix and the rest of MA☆SPARK! RECORDS up next to names like Shibayan, and ENS! I HIGHLY SUGGEST IF YOU LIKE SHIBAYAN TO DOWNLOAD THIS ALBUM.

LunarSpotlight | Posted on January 13th, 2014, 01:13:18 AM
I tossed $10 towards cYsmix for his album “Haunted House” which has the songs from this album on it along with a bunch of others. His work is pretty awesome, I recommend it for anyone who likes music in this genre.