As a result of our trip to Boston, many opportunities have opened up to us as an internet radio station. The people we met and the network connections we gained through our promotional campaign as well as our panel presentation have caught the eyes of a few key people.

As previously mentioned, we ran into the founder of Yellow Zebra, a Touhou music circle, while we were at Anime Boston. He told us about some of the work he’s done, and we even got to sample some of his new work while riding on the city subway. One thing he told us was that we as a radio station are free to stream any content from Yellow Zebra, a circle that has already released its final album. Our library update this week will be including some of that material.

Other works that will be hitting the library soon come from additional artists that have expressed interest in us getting their music out there. In fact, there’s so much material in this library update that our active playlist will more than double, forcing us to upgrade the streaming server in the near future. Presently, we have a bulky 5TB/mo. server for streaming music, but that only comes with a limited amount of space. With listener averages being the highest they’ve ever been post-Anime Boston, now may be the right time to do this.

Freeze-ex, an artist who we met with in Boston, became a fan of the station and expressed his appreciation for what we do by drawing a unique, one-of-a-kind piece of art for us. As it turns out, he wasn’t the only artist that likes what we do. 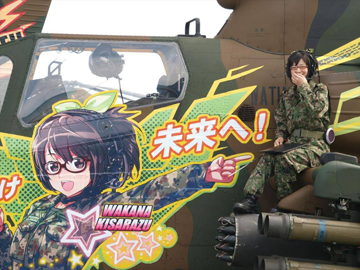 Someone in the US Air Force recently asked if they would be able to use some of the artwork we have to be placed in similar fashion as the photo below (the artist in the photo is not the artist that contacted us, this is just an example). It seems that someone took one of the last news article titles, “To the Skies, to Anime Boston” more literally than we ever could have imagined. We’ll be getting in contact with a couple of our artists in the next week to discuss potential designs which may eventually be placed on the side of a real aircraft!

Also while in Boston, a representative from a Boston-based newspaper caught up to us, and told us about how they liked what we’re doing, as well as how they liked this year’s handout artwork. At the time, they said they would try to get something done for us. Since then, they’ve informed us that we’re able to get a small piece run in their music section. Our contact told us that there’s a very small chance it’ll run next to a piece about Justin Bieber’s next music album, which would make for hilarious juxtaposition. We’ll see what happens!

Finally, our newspaper contact also informed us that their paper has ties to the local transportation authority. As such, there’s a slim chance that adverts could start appearing next year in some of their vehicles. That’s right. “Gensokyo Radio” may be written in subways, trains, and yes, even buses.

Anywho, that’s a lot of news for one day. I have library work to tend to, so until next time!

N1 job…i wish you could promote the radio in germany Q.Q

LunarSpotlight | Posted on April 1st, 2014, 09:33:16 PM
Happy April Fools day everyone~ It’s true that we’re putting out a huge update soon, that Yellow Zebra gave us permission to stream their music, that we got to sample some of the founder’s new work, that our listener average has been the highest it’s ever been, and that Freeze-Ex is an artist that appreciates what we do. Everything else is fabricated to some degree. I hope you enjoyed the article :3