This Summer, a few members of the GR staff made the cross-Pacific journey to live in Japan for more than a month and become immersed in the land and culture. Between exploring the incredibly vast city of Tokyo, spending time with folks like Nelson (“The guy who keeps getting photos with ZUN”), and taking bullet trains to various regions of the country, there were a few things we needed to take care of.

First, for those of you who follow us on Twitter or listened to our past few shows, you’ll know that we had been posting our progress with a project whereby we helped Komeiji Records by producing their inventory for their first appearance as a circle at Comic Market 92. After production had completed and stock was shipped out, we had more work to do Japan-side.

For the sake of shipping costs, we sent the completed and printed CDs and labels ahead of time. After we arrived, we then had the task of cleaning and placing CDs and labels into jewel cases, and then wrapping them all up.

Following that, we needed to move 6 boxes to a hotel room more than an hour away by train, and then eventually move those boxes to a table in the Tokyo Big Sight venue about 40 minutes away by foot… in light rain.

Finally, we helped them at the table by setting up a preview station, creating some signage, and making sales. Getting to that state, sitting at our half-table next to Tatami Stugiwo, and following through with what DJ Koishi had originally signed up on a whim to do was one of the most logistically challenging tasks I’ve ever been a part of planning and executing. At the end of the day, we found some success in our hard work. 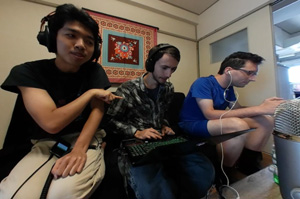 Beyond Comiket, we had also set out to run a Live show in Tokyo. I was joined by Nano and Xara in person around a microphone with another member of our Discord chat. DJ Koishi and a past special guest Bucky did not attend due to getting lost somewhere in dreamland.

The challenge with this show was that we ran a setup similar to the setup we used in the very early days of our live broadcasts. We had one microphone, a couple cables, a sound card, and an audio splitter, and we made it work. 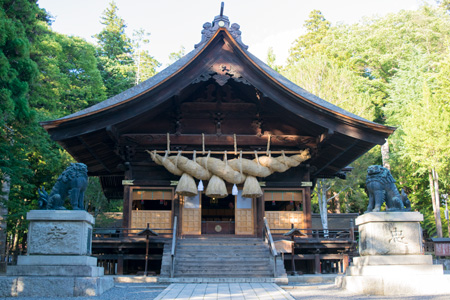 Finally, there was one day where I had set out on my own, away from the group, to visit an area of Japan which had multiple ties to the Touhou Project series. I traveled 2 hours outside of Tokyo by train to the Nagano Prefecture in central Japan where one will find familiarly named geological features like Lake Suwa and Mount Moriya.

From Shimo-Suwa station, I visited two of the major shrines in the area plus several smaller shrines inbetween. Akimiya Shrine was on top of a hill and provided a really great view of the Shimo-Suwa and Okaya cities surrounded by a mountain range in the distance. I walked across town towards one of the other major shrines and found a few more inbetween before leaving town after the sun had set. I’ll likely put a more detailed account of this experience on my separate blog over at lunarspotlight.com/blog.

Overall, it was an incredible trip filled with new and novel experiences which I’m pleased to have with me even after returning home. It was a long trip, and being back in the states is good. Now I just need to figure out how to wake up at a normal time again.