Besides rating songs when having an account in GR, it is possible to...?

Hello, there. I’m mostly sure that all these questions have a negative answer after looking up and down in the radio section but I’ll ask however. It is possible to…

● …see which songs did I rate and how many stars I gave them?
● …change that list?
● …listen songs in the GR library any time and no necessarily having to wait until those appear in the live radio?

I’ll give you a few imaginary examples of what I mean with these doubts.

Let’s say I low/high rated a song but I’ve changed my mind after a couple of repetitions. I know which song is and I can find it rather easy. But, obviously, I don’t know when it is going to shuffle again in the playlist so I’m looking for an option that could make me able to check and/or change rating without needing to wait for it.
Or let’s say that I’ve got my own playlist and, of course, my favorite songs and want to rate the same songs in the GR library to make you know I like those ones but, again, I can miss the moment when are played so I think ‘Maybe I can find those songs in the library… Ah, there they are. Ok, now… can I rate them from here? Hmm… Doesn’t seem so. Can I play them separatedly and rate them when the UI appears? I can’t find a way.’

I readed the topic regarding to metadata not refreshing to the current song and I noticed the same when I started to listen via Aimp player but I didn’t care much. Sometimes there’s a delay between the song shown in browser and the one in the player, and that’s just expected, but this leaded me to rate the wrong song when I was listening the other day and the delay was much more than I thought (the metadata not refreshing didn’t help either… haha). I wanted to correct my mistake but didn’t found a way to do so.

I looked for information regarding those matters in the radio section with no luck so I decided to ask directly here. Please, let me know if I did something wrong when posting this.

Loving the radio so far.

First off, there’s nothing wrong with asking about things you want to see available. It let’s us know what the community wants, and helps us prioritize new features down the road. With that, I’ll get to your questions…

Is it possible to see which songs a user has rated and how many stars were given?

People have asked before about this, and we have a page which displays all of this information, but it is not yet public. We put it together based on the data sheet we use for when we look at the highest rated songs each month to help put together the playlists for our shows. Because of that, it doesn’t match our branding or theming on the site, so it’s not publicly available. If you really need to know about your own rating history, PM me about it.

Is it possible to change ratings through such a list?

No. Users will not be able to change ratings through such a list because songs can only be rated when they’re playing on the station. This is how we verify that listeners are listening to the song and aren’t submitting dummy ratings. If a song plays that you’ve rated in the past, it’ll display the rating you gave for it. If you want to change the rating, just rate it again and it’ll overwrite your previous rating.

You can even rate the same song the same rating again. These would count towards the year-end rating chart that we put together if you hadn’t rated the song during the year, though there’s not currently any indication of when your last rating had been submitted (there’s an idea).

Is it possible to listen to songs in the GR library any time instead of waiting for songs to appear on the station?

The closest we’ll get to having something like this is potentially offering the ability for users to preview songs through our album pages. This would be a 20-30 second preview clip to help users recognize songs.

It is not likely that we’ll ever have an on-demand music service. We’re a radio station first, and one of our primary goals is to help facilitate the discovery and enjoyment of the fan-made arranges at large. Additionally, we encourage listeners to support the artists directly when they’re able to, and offering a service to listen to the music at-will could be perceived as going against this.

As a sidenote, the live shows will showcase songs that are not in the station-side library either because they’re new and haven’t been cataloged yet, or they’re songs that we’ve chosen to omit from the station for one reason or another (there are many reasons this could be the case).

If you’ve heard a song during one of our live shows that you enjoyed, our shows are on-demand via Mixcloud, Satchel, and the Shows tab on the site. This is the only content we actually do make available offline so you can listen to it whenever.

Oh, I’m not dissapointed or anything like that. Don’t get me wrong. In my case, the mistake I tried to correct the other day wasn’t a big deal. I mean, I really doubt one 4-star rating in a random song may change much on your lists so nevermind. Also, I didn’t thought in that moment to check the name of the song through history tab and memorize it or something like that… haha.

I fully understand why users can’t change rate from outside the stream. If you put it in that way makes total sense. Even so, I’m looking forward to the rating list to be available, not necessarily completely public but at least for the user who wants to check his/her own ratings and keep track of all the songs that could be too many to remember them all.

Regarding to song preview on albums, that sounds good enough but I’m not sure where that option is available. Mind guiding me with an example? Though I guess not all albums count with that feature.

I’m not entirely sure how it works the shows tab. I mean, I get that it’s only for displaying info but… when are those shows broadcasted? Or are they separated from the radio and transmitted elsewhere? Well, I’m sure I wouldn’t be able to understand it anyway (listening and reading in english are way too different for me) but I’ll appreciate the info for keeping it in mind.

Sorry for the extra questions and thanks in advance.

And just for clarify: I wasn’t expecting to hear songs from GR library for nothing more than be able to rate them when they’re not currently on the radio showcase, guessing that could be a way to pop up the rate option (hey, I’m the kind of guy that always think in alternatives for better or worst). There’s plenty of other “services” that let you listen freely whatever and whenever you please and I like GR because it does not follow that line. The radio feeling has its own charm and I praise what you’ve done here.

The “charm” that comes with being a radio station versus an on-demand service is something we’ve enjoyed having over the years, so I’m glad you like it as well.

I rated the wrong song, how do I fix it?

Rogue ratings are unlikely since there’s a lot of verification that happens when a rating is submit. You have to be logged in and listening from the same IP address, rating a particular song has to be done within a specific time frame, etcetc. There’s plenty of verification to help make sure that when you submit a song rating, it’s going to the correct song. In any case, I wouldn’t worry about it too much.

Where are song previews?

Song previews are not currently available. We asked the community what they thought about the idea in a previous forum thread, but as of this moment, it has received zero replies. Like I mentioned earlier, we depend on community feedback to help guide our priorities and get a better sense of what people want to see coming from us.

How do shows work?

If you’re unfamiliar with how our shows work, we have at least one live broadcast every month, with “Gensokyo Radio Live” being our most consistent show. Our show dates and times are announced via Discord, Twitter, Facebook, Steam, etc. During shows, listeners join us on Discord and we chat during the show about various things. The shows themselves cover a variety of topics, current events, etc. as well as playing some of the newest and highest-rated music (from listener ratings on GR) from the past month. 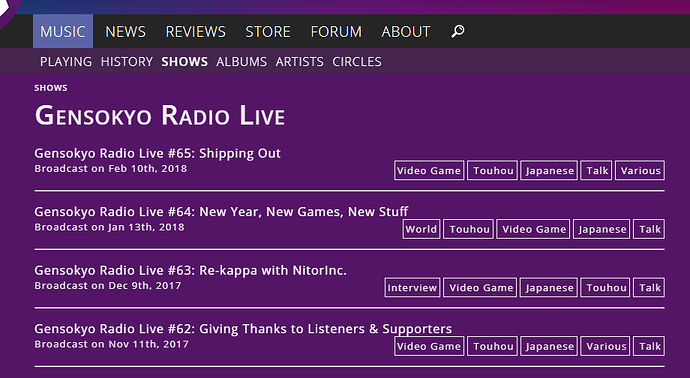 After the live broadcast is over, the show is made available to our patron supporters first, and then a week later they are made available on platforms such as Mixcloud, Satchel (app), and our aforementioned Shows page (click on the show title to open the player page for that show). These are all places where you can select a show from the past and start listening to it.

Oh, the shows are transmitted via Discord. That sounds fairly practical.

I checked the shows tab before but didn’t notice that every title there have a link, my bad… haha. I’ll start listening some of them later to catch the pace.

That’s all for now. Thank you very much for the detailed answers.

To clarify, our shows are broadcast on the station. We do not recommend listening to the station via Discord, but we do use it as a social hub for community interaction on and off the air.