I’m not sure how we could possibly top this, but this is seriously interesting news.

This weekend at Reitaisai in Japan, the newest Touhou game, 14.3 ~ “Impossible Spell Card”, was released at Touhou’s largest convention. In the midst of it all, one Touhou fan managed to get a photo with ZUN towards the end of the convention… and he happened to be wearing a particular shirt. 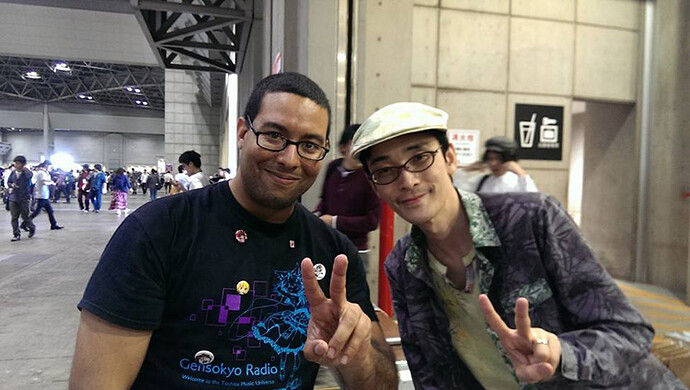 For us, this is the first definitive proof that our presence, in some form, has been near the man himself (though it’s possible the first time was actually at AWA 2013 when we had 500 handouts buzzing around, we don’t have proof on this level). Yes, it’s awesome that this person got this photo just by asking him as things were winding down. Also, remember that Reitaisai is a one-day event, meaning this shirt is the shirt that he wanted to wear while walking the aisles of incredible quantities of content and music by thousands of circles. We’ve never had anyone in Japan promote for us with handouts, but I think this is perhaps another way to do so with potential for great impact.

Anywho, this is something that more than a couple people though we should share beyond our initial post on Twitter. We’re on Japan’s radar now more than ever before. To all of our fans, and especially to this individual pictured next to ZUN wearing one of our “Digital Miko” T-shirts, never stop being awesome!