2015 was a busy year for everyone on the GR staff. Collectively, we attended at least 6 events last year, with about half of those being new for us. We even saw some overseas promotion in France and Japan which our listeners graciously helped us out with as in past years.

New Statistics
For the past few years, at the turn of the year we’ve put together a stats table filled with numbers detailing how many unique listeners we’ve seen at the station over the months and throughout the entire year. The list shows the top 50 countries and cities with the highest number of unique listeners. The list is available over on our Facebook page, and will be made available on our stats page later this month.

New Live Info Framework
Shortly before this article was published, we released GR v6.1.3 which includes a long-awaited update to our live information management system. The update includes a complete re-write of the web-reported XML feed, as well as some core changes to a script responsible for tracking and logging song data.

What all this means is that the system should be more accurate when reporting the currently playing song, something I’m sure many of our listeners will appreciate. We’ve been working on getting something out the door since last year. It’s a complex system with many moving parts, but I think we finally have something that will work much better than the previous system.

New Staff Members
Last year, we started an initiative where we wanted to grow the staff and create additional, more dedicated roles. Once we figured out where everyone who currently exists fits, we recognized the gaps, or areas where we could improve. We invited Puzzle Plate on last year who now heads the marketing and promotion effort. Conversely, we’ve also seen the station founders, Auritribe and Kyosagi, take a step back. Everyone’s got a lot going on, and everyone’s contributed in their own way. We’ll always be thankful for that.

Now, for 2016, I’d like to introduce our newest staff member on the station-side, Emurock. We first met Emurock at Anime Boston in 2014, and he’s been an editor on our Facebook page ever since. He’s an avid fan of the games and music and has one of the largest physical collections of fan music I’ve seen. With that said, it’s only appropriate that he will be filling in for the role of Library Manager, previously held by Auritribe and Kyosagi. Hopefully we’ll be able to have him on some of the future Live shows.

New Chat Module
Last year, we hopped on board the Discord train. We invited our listeners to it during one of our Live shows last year, and it’s been filled with activity ever since. One of the problems we faced with this was making sure our listeners were able to easily join… Discord gives out an invite link which can then be given to people on a case-by-case basis, but it’s a series of random numbers and letters, meaning it’s not the easiest thing to verbalize or recall from memory.

Moving forward, a new module will be available on the sidebar to make it much easier for listeners to join. All you’ll need to get that Connect button to appear is an account at GR. You’ve already got one of those, right?

New Celebration
2016 is a special year because it will be the 5th year that Gensokyo Radio has been in operation. We’ll be doing some special stuff later in the year, with one of those things being an anniversary celebration this March when GR officially turns five.

New Fan Video
Finally, I’ll leave you with a new live action video produced by Ziyang Yip released just this weekend, featuring a few characters you’ll recognize from Touhou Project. You might recognize a familiar face as SevenColorsAlice comes back to portray Alice alongside a couple new faces in a number of stunning settings. The video features music from the circle kimino-museum. 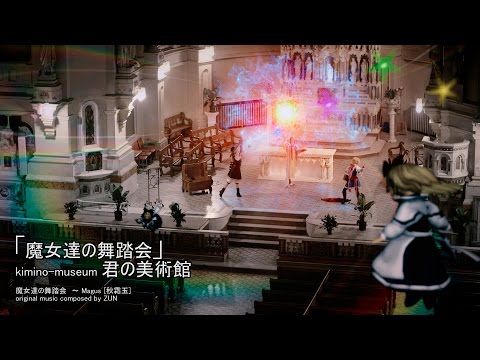 Live #40 will be on January 23rd this month. More information on that coming soon.

Glade | Posted on January 19th, 2016, 09:12:53 AM
I don’t have much to say here, I joined the masses here in what could be seen as 4th quarter. Though I do want to congradulate Emurock on the promotion to Library Manager.