While we Wait, Here's a Question

Anyone know what the origin of this is? Or just, why? 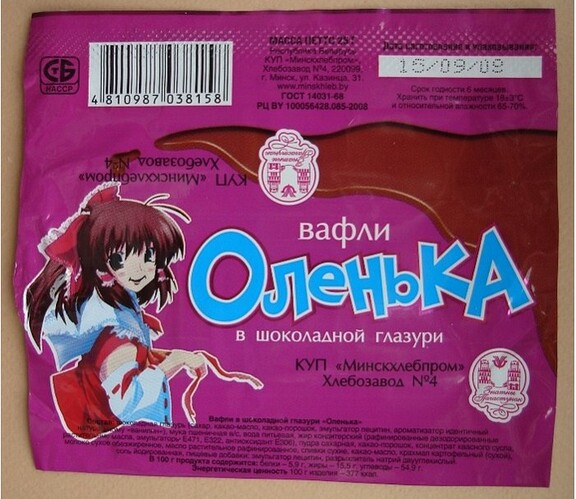 And no, you can’t say Russia, that one’s already been taken.

(Guest) Scarlet_Meister | Posted on August 2nd, 2012, 09:32:47 PM
First of, I unfortunately don’t know any Russian, so this is all from visual perception + comparition

The company producing these is likely Минскхлебпром, or MINSKHLEBPROM, at least judging from the logo (comparing it to the one on here: http://www.minskhleb.by/). This of course suggests it’s actually from Minsk and thus Belarus, not Russia

I’ll cast this as my vote^^ They seem to produce plenty of sweets, the type the picture shows is ‘Вафли’ and you can find one with the same flavour on this page (right column in the middle) Каталог производимой продукции предприятия Минскхлебпром Don’t know if it’s with a nice Reimuprint though, since the pictures are all missing… As for why something like this actually exists, I can’t provide an answer. If you are sincerely interested though, I suggest checking out the ICQ number or eMail address the english page (that unfortunately neither has the same logo nor sweets :/) offers: ICQ: 411347865 E-mail: [email protected]

LunarSpotlight | Posted on August 2nd, 2012, 10:00:11 PM
You get a cookie. I was simply amused by this for obvious reasons, but good work taking it to another level. I wonder if anyone else is going try taking a swing at this :3

winterwolf | Posted on August 9th, 2012, 11:52:30 PM
its Belorussia. Nice one. I can read russian, there was this design, but then they changed it or got 2 versions of waffles now. Other articles about waffles of that company Haruhi Lookalike Appears on Belarusian Waffle Packaging (Updated) - News - Anime News Network Смотреть всем! Вафли с АНИМЕ-ГЕРОЯМИ!!!. Обсуждение на LiveInternet - Российский Сервис Онлайн-Дневников

LunarSpotlight | Posted on August 10th, 2012, 10:26:58 PM
That last link contains the posted image. Yep, excellent work by all of you for figuring it out