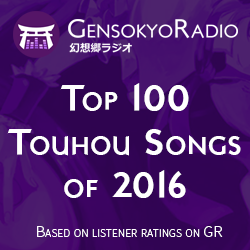 We have burst through the gates of 2017, and that means that some of our year-end stats work has begun. We’re starting out with what we think will be a popular reference: the Top 100 Touhou Songs of 2016!

I was driving home from work last night and caught the beginning of a massive countdown list, and I figured we could do the same thing here. Four hours later, and we’ve got a list which comes directly from listener ratings.

[Find the chart below or the spreadsheet HERE] 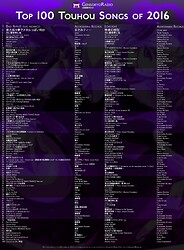 Listener ratings on Gensokyo Radio are exactly that: ratings that come from listeners on our radio station. While a song plays on the station, listeners are able to tell us what they think by using the Ratings module on the sidebar. This is logged and tallied on a monthly basis to help us with the Live shows, so gathering the numbers from the year was a trivial task.

The #1 spot continues to be held by the infamous Bad Apple!! song by nomico (having held the top spot last year as well). Despite having been published nearly 10 years ago, it received about twice as many ratings as the next highest rated song, with ALL ratings at 5 stars. Having said that, no matter what you might think, Bad Apple!! stands out from every other song because of this.

Beyond that, the ratings table is dominated by a small handful of music circles including Alstroemeria Records, Shibayan Records, Demetori, Yuuhei Satellite, making up over 60% of the top 100 list. There were 17 other circles and 1 independent artist (cYsmix) that made the list as well.

2016 has been a good year for not only Touhou music, but music in general. Will Bad Apple be knocked off its throne next year? Ultimately our listeners will decide.

We look forward to continuing to bring you the sounds next year! Thanks for listening!!

LunarSpotlight | Posted on January 7th, 2017, 06:18:27 PM
Wow, that must’ve taken some time to put together! Pretty neat. Don’t forget to put in that this is a list put together by us. That way, people might stop bugging you about why /you/ made this list the way it is, and they’ll bug us about it instead